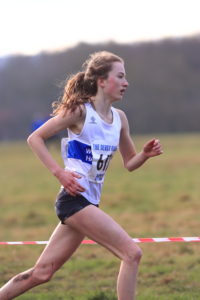 SO what a great day for the Westbury Harriers pair of Hannah Hobbs and Dalis Jones at the 2017 Midland Counties Cross Country Championships.

Both runners won silver medals at the event held in Loughborough with Hannah finishing runner-up in the under 20 women’s race and Dalis securing second place in the under 13s age group.

For Hannah (pictured left) the silver continues her excellent start to 2017 – as she has finished on the podium in every race she has started so far!

At the South West Championships in Exeter she was a decisive winner around the Haldon horse-racing circuit and then Hannah stepped up a level to make the top three in a British Cross Challenge event for the first time with second place in Cardiff last week. 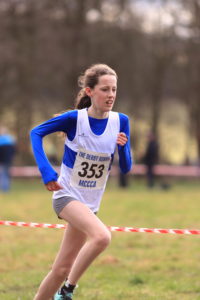 The latest silver medal in Loughborough in her first year as an under 20 – a year ago she was runner-up in the under 17 women’s race – suggests that Hannah, who is coached by Pat Gallagher, has really moved up a gear and is racing with such confidence and maturity.

Likewise Dalis (pictured right) has had a great start to the new year. She, too, was a winner at Exeter and she celebrated her debut in the Midlands with another excellent silver. Watch out for her progress during the rest of the season.