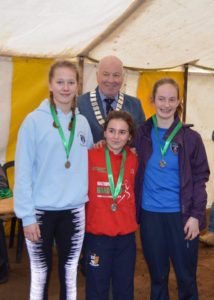 IT was not just a day of individual success for Westbury Harriers at the Midland Championships.

While Hannah Hobbs and Dalis Jones will take the headlines the club’s under 15 girls’ also deserve huge credit for winning the silver medals in the team competition.

Official results have still to be published but on the day the squad of  Ellie Hobbs (sixth), Rhiannon Paton (17th), Rosie Hamilton-James (18th) and Emily Whitaker (32nd) proudly took their place on the podium.

Their delight was in contrast to the frustration of the Westbury under 13 girls’ squad of  Dalis, Poppy Clark (fifth), Amelia Honor (ninth) and Meghan Porteous (66th)  as they missed out on a medal by a single point.