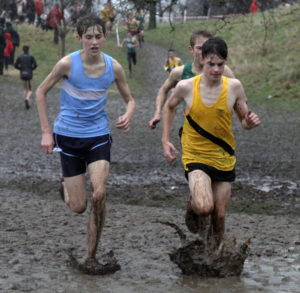 HUGH Sadler was another local medal winner at Loughborough as the Bristol & West AC runner won silver in the under 17 men’s race.

Hugh (pictured on extreme left running for Avon at the South West Schools’ last year) took an early lead in the race but was pegged back by Joe Pollard of Charnwood, who urged on to win by six seconds. The pair were both well clear of the bronze medallist.

The silver was Sadler’s first medal in the event eclipsing his previous best of fifth place in the under 15 boys’ age group fur years ago.

It also continued his fine form this winter with seventh places in the British Cross Challenge events in Liverpool and Cardiff and victory in the Tri Counties Championships.

Sadler will be now looking for a strong performance at the South West Schools’ Championships in Truro on Saturday when he will tackle the senior boys’ race for the first time. Last year he finished runner-up in the inter boys’ age group on a mud bath in Cheltenham.