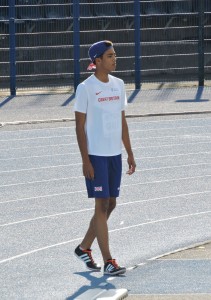 PROOF that Tom Gale has his mojo back was further enhanced by an excellent silver medal in the high jump at the European Under 23 Championships in Sweden.

The Team Bath international, who briefly had a spell with Bristol & West AC as a higher claim athlete for British League matches, recently admitted that 2018 was a year to forget and that he had lost his way a little after a couple of years of non-stop success.

“Last year I suffered a loss of motivation and my results showed that,” said Gale. “I knew that I could not keep on going up and up but what was unexpected was that I felt so bad last summer.

“To be honest I am feeling more like myself now, more like the Tom Gale of 2017 when I felt like every competition I went into I could win.”

So the only frustration for Gale at the weekend was that he had missed a good chance of lifting the title after the competition ended in a jump-off between him and Maksim Nedasekau of Belarus.

“To be honest I hadn’t paid enough attention to the competition so didn’t realise we were heading for a jump-off,” added Gale. “That is something I should have been aware of and I’ll have to learn from that for the future.”

So while Gale would down after failing 2.29m Nedasekau was still in competition-mode after going close to 2.31, which then resulted in both men attempting 2.29m to decided the outcome of the gold.