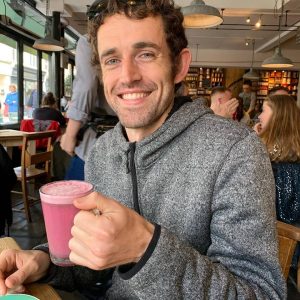 PETER Le Grice’s winning time of 2hrs 16mins 23secs in Brighton has lifted him to second on the Bristol & West AC All-Time Rankings.

Surprisingly top spot isn’t held by Nick Rose, who was so often a familiar face in the London marathon but more in a role as pacemaker. Rose’s official PB for the 26.2 miles is 2:21.10.

Holder of the club record remains ex-RAF man Ray Crabb, who clocked 2:13.15 in the 1983 London marathon, which was just the third time it was held.

Le Grice just sneaks ahead of Wayne Buxton, whose best of 2:16.38 was set in Rotterdam 28 years ago.

Le Grice (pictured) has strong family roots in the Channel Islands – hence the name – but now lives in Cornwall where he runs the family hotel just outside Penzance. Within the Duchy he has moved to second on the county rankings behind former GB international Dave Buzza (2:11.18, in 1993).

Locally in Bristol only the Westbury Harriers pair of Robin Nash (2:14.52) and Chris Buckley (2:15.48) have run quicker while another top runner of that era, Maurice Cowman, clocked 2:16.45 to win the Taunton marathon, a record that still exists and probably will never be beaten.