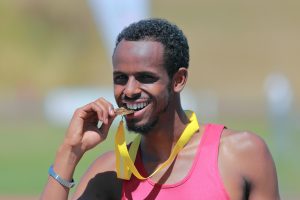 ABDI Hasan produced a sparkling performance to take centre stage for the Avon squad that made the trip down the M5 for the South West Inter Counties Track & Field Championships.

The 16-year-old Westbury Harrier broke the championship record in winning the under 17 men’s 800m in a time of 1mins 57.20secs.

Hasan took charge from the gun and led all the way in the searing heat to just miss his own personal best, set last year, by 0.64secs.

“Abdi went a bit mad on the first lap going through the bell in around 55 seconds,” said Pat Gallagher, who is his coach at Westbury Harriers.

“He led from gun to tape but if someone else had been able to go with him he might have gone ever faster.

“But Abdi is slowly coming into form after suffering from ill health in the winter and then a hamstring injury early season. He has another three races to come with the YDL, then the Midland Senior League and finally the Nationals.”

Gentry ran that time just a couple of weeks ago when winning the Avon League match at Yate.