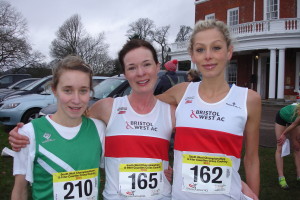 JESSIE Sanzo (pictured centre) has clearly shaken off her injury problems as she set the fastest time of the day at the Avon Road Relays.

Taking over in second place behind her Bristol & West clubmate Helen Newberry, who had been handed the lead by Jasmine Finney, Sanzo tore around the course in a time of 17mins 33secs to slice seven seconds off her own course record set last year.

That put the club’s veterans over 35s team firmly in the lead which Julia Belyavin retained for victory in a time of 54mins 41secs with the B&W A squad of Finney – whose time of 17:45 was the second fastest of the day – Newberry and Rhian Jinney-Jones, making her debut for the club, second.