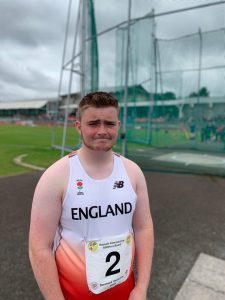 TOBY Conibear can do now wrong at the moment.

After winning back-to-back silver medals at the English and British Schools’ Championships the Yate & District AC hammer thrower has now been selected to represent England at the Youth Nations Cup in Dublin on Saturday (August 3rd).

“It is nice for Toby to get this reward and it will be a great experience for him,” said his coach Matt Spicer.

Conibear threw 59.36m to ensure an England one-two in Swansea with team-mate Alex Bernstein (68.01) of Preston and then the following day won the under 17s hammer for Avon in the South West Inter-Counties Championships at the Exeter Arena with a championship best performance throw of 62.04m.

Two championship silvers, a gold and his first England honours at schools’ and now at clubs’ level in two weeks will certainly make this month one to remember for Conibear.

Also in the England squad are fellow west athletes Annie Testar (Stroud) in the 800m, Sam Brereton (Newquay and Par) in the high jump and Tom Dollery (Taunton) in the javelin.