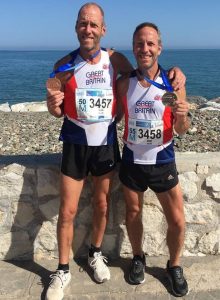 THE Woods brothers of Bath have made their mark at the World Masters Championships in Spain over the weekend.

Competing in the 8k cross country event in Torremolinos older brother Guy (pictured above on the right) finished fifth in the over 55s age group to lead the three-strong Great Britain squad to the team silvers behind a dominant Spanish contingent.

“It was a brutal cross country race,” said Woods.

“It was a tough, four-lap course including roots, stones and hard, bumpy ground that took a real toll of the legs and the class of the field was amazing. Anyone who was anyone in masters’ running was there so I was pretty happy with that although an individual medal would have been nice.”

Woods reckoned he could have contended for a top three place in the 10k road event but his legs were so battered after the cross country that he was forced to withdraw.

“In hindsight and looking at the results of the 10k on Sunday I may have had a better chance of getting bronze in that event but it was a long way to go just to run one event and that’s how it goes,” added Woods.

“My legs were shot after the cross country.”

Younger brother Alec also made the podium leading the GB over 50s squad to third place in the team event as he placed seventh in is age group. Alec recovered well enough to line up for the 10k and just crept inside the top 20.