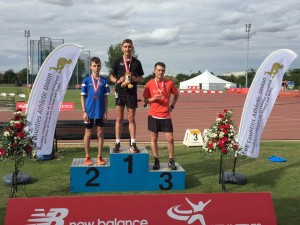 ADAM Wilson was also a gold medal winner at Bedford over the weekend.

The British Disability Championships were incorporated into the meeting and the 19-year-old Yate & District AC runner (picture standing proudly on top of the podium) raced to a superb victory in the mile.

Wilson clocked a time of 4mins 34.30secs to clip five seconds off his PB set during the indoor season as he finished 16th overall in the race.

“Despite a very up and down season, (it is) very pleasing to become senior national disability 1500/mile champion in a mile PB of 4.34,” said Wilson.

“Slight disappointed in the time though.”

Times will come Adam, it was all about gold at this meeting.