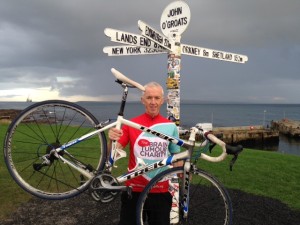 DESPITE riding 1,000 miles in six days and only getting home last night Michael Thompson is still determined to make the Team Bath AC training session at the University this evening.

“The legs feel amazing!” said Thompson after his epic ride from Land’s End to John O’Groats.

“I’ll be happy not to get on the bike again for a while but wouldn’t mind a run so will try to get the club session on Tuesday.”

The motivating force behind Thompson’s grand tour of the UK was to raise money for the Lewis Moody Foundation and the Brain Tumour Charity as a tribute to the death in July of great friend Dave Syrett, the ex- Swindon Town, Mansfield Town striker and Warminster School groundsman.

“I had amazing support along the route and there are still a number of other events that are planned so eventually I hope the figure will rise to £15,000.”