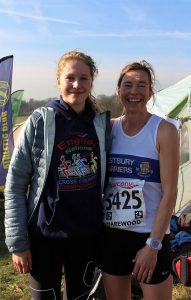 WITHOUT trawling through the several hundred results I am just left wondering whether the Hobbs family produced one of the best family results of the day at the Saucony English National Cross Country Championships in Leeds.

Mum Maria might not quite have that pedigree but as a vet over 50 she finished a creditable 558th.

I wouldn’t like to say that was the best mum-daughter double act at Leeds but I am sure it won’t be far off so well done to them both.