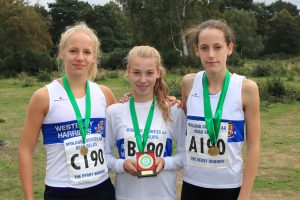 The trio of Dalis Jones, Amelia Honor and Kate Howard (pictured above, courtesy of Neil Miller) lifted the title in a time of 44mins 21secs, just edging out Birchfield Harriers by nine seconds after a thrilling finale that had the Harriers supporters’ tearing around the course shouting support.

“The team led from gun to tape, although there was an anxious wait after a report from the Jamboree Stone came back saying that Birchfield had almost caught Kate Howard on the last leg,” said team manager Neil Miller.

The trio should be rightly proud of their strong performance to beat Birchfield with Gloucester AC finishing a surprise third.

There was further glory for Westbury with Jones clocking the fastest individual time of the time as she tore around the course in 14mins 02secs, seven seconds quicker than her nearest rival.