Hasan (pictured below extreme left with his team-mates at Cardiff in the previous fixture) won the under 15 boys’ event to add to his wins in Bridgend and Cardiff while Robinson again proved his talent with victory in the under 11s ae group. 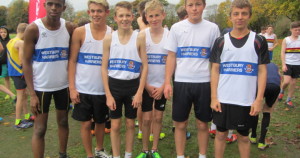 ade it three wins out of three in the under 11 girls’ age group and she was closely followed by Elen Ruck in her first ever Gwent League fixture.

Ellie Hobbs ran well to finish runner-up in the under 15s with Isabel Smart seventh.