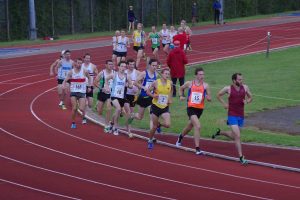 “The purpose of this event is to get people running together from all over the south west and currently we have an A race with the likes of Jack Bancroft, Ben Robinson, Harry Allen, Andy Watt and Kurt Taylor from Bristol and West all looking to go under 15 minutes,” said a spokesman from B&W.

“From further afield we have Will Ferguson of CLC striders who has clocked 15:07 over 5k and with a good Cheltenham contingent joining the race we expect some quick times all over.”

The meeting starts at 6pm with the A races at 8.40pm. The standards range from 22 minutes to 14mins 30secs and runners of similar abilities will be grouped together to give them competitive races.

“Pacing assistance will include a pace-maker for each race running splits towards a pre-identified time,” added the spokesman.

“The event will be chip timed with a lap split displaying 400 metre splits.  Supporters will be encouraged to cheer on athletes and the bar will be open for the whole event.”

No entries will be taken on the night and to register log onto: www.entrycentral.com