THERE were four medals for Avon athletes at the English Schools’ Championships in Gateshead over the weekend.

Individually the best result came from 13-year-old Tia Jackson, who won silver in the junior girls’ long jump with a leap of 5.52m, which beat her previous best of 5.40m. 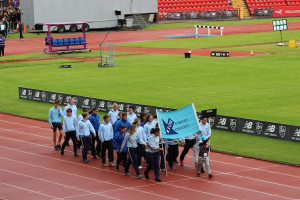 There was also a rousing silver for the inter boys 4x100m team of Cameron Sprague, Daniel Brooks, Ty Roberts and William Hines.