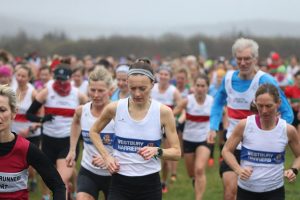 THERE was also a big turn-out for Westbury Harriers’ senior women with a squad of 20 lining up for the first true cross country race and conditions of the winter.

“One that won’t be forgotten in a hurry. After the balmy conditions of the first two Gwents – we were thrown in to some ‘proper’ cross country conditions.

“Always fun to be on a new course, especially with loads of mud, slanting rain and some windy conditions thrown in!

A huge thank you to all ladies for turning out and showing they are up for a challenge. Despite the conditions, we had some fantastic performances. With some commenting how much they enjoyed it!”

Leading scorer was Robyn Esther Ellis, who enjoyed her best run of the new campaign in 14th. She was well supported by Katie Hughes in 18th, Kirstie Hamilton-James 20th, Vicky Waters 37th and Jayne Pemble 39th as the club’s leading five all made the top 40.

“All ran superbly. They could have chosen easier conditions to start, but at least other courses will seem easier after that!”