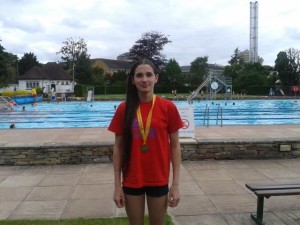 SARAH Wilson has been crowned British Biathle champion – and is now off with the Great Britain team to Georgia for the World Championships.

The 14-year-old Team Bath AC athlete from Batheaston won the national youths title for 13-14 –year-olds at Salford last weekend, finishing three seconds clear of her nearest rival in a thrilling race held over a 500m run followed directly by a 100m swim and then straight out of the pool for a final 500m run.

“Sarah was caught by the other girl in the swim but the shad a very good transition and pulled clear in the second run,” said proud mum Rosie Wilson.

The significance of her win quickly became apparent when Sarah, who is also a member of the new Bath Pentathlon Club, was taken by the team management to be measured up for GB kit for the trip to Eastern Europe at the end of next month.