Macquisten was assistant to Dan Cossins, who last week confirmed he is quitting the sport after becoming disenchanted with the world of athletics. 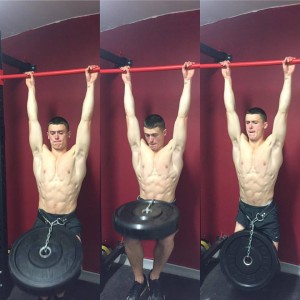 Stone (pictured left at a recent punishing training session doing hanging knee raises with a 20k plate in Larkhall, Bath) had only joined Cossins’ group in the last year after splitting with Alistair Abrams so was understandably disappointed to be tackling another change in his set-up.

“It is a real shame that he is not enjoying the sport any more but he has to do what is right for him.”

Macquisten has taken over most of Cossins’ group – though inevitably some will leave – and Stone says he has quickly settled into the new regime.

“Connell is really good and to be honest it feels much the same and training is going really well,” added Stone.

Stone said he will race indoors but not over the 200m, having suffered the bad shoulder injury when falling at the end of a race last winter which ultimately ruined his outdoor campaign.

“I won’t forget that moment when I broke my shoulder so I will focus on the 400m this winter to build up my endurance and conditioning,” said Stone.