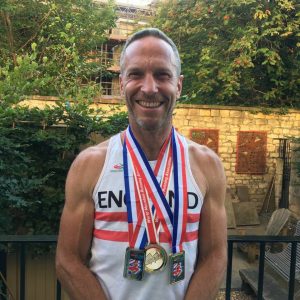 Grand Master: Guy Woods with all his major medals this year

GUY Woods has added the British Masters 10k title to his 5k success following another excellent performance in the over 55s age group.

The Bath-based member of South West Vets finished 15th overall and first over 55 in the Trentham 10k which hosted the British Masters Championships on Sunday.

Having won the 5k title in Horwich in June – and don’t forget the team gold for Great Britain at the World Masters Mountain Running Championships in Slovenia in June – the 2018 season is turning out to be quite a good year for the popular Woods.

“It is definitely my best ever year as a veteran runner,” said the 56-year-old.

“I had a few silvers and stuff in the over 50s age group but unfortunately was never quite quick enough to win but at the moment I seem to have hit a purple patch.

“I must be getting wiser and better at training as I get older and I have also lasted the course!”

Next up for Woods will be the World Masters Championships in Malaga, Spain, early next month when he and brother Alec, who was runner-up in the over 50s category on Sunday, will contest the 8k cross country race and the 10k road event. 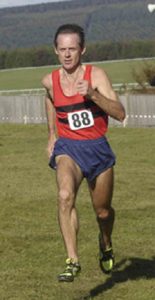 Also interesting to note that in Trentham former international runner Nigel Gates (pictured opposite), who is now racing for Westbury Harriers, won the over 60s age group category.

Gates, who for many years lived in Bath and then Brighton, is now living in Dorset.