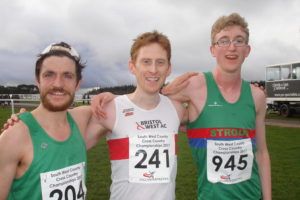 Twelve months ago Owain (pictured above centre with Poole AC’s bronze medallist Tom Austin and Stroud runner-up Tom Mortimer) lifted the individual title for the first time at Bicton College. By his own admission Owain wasn’t as fit as he lined up to defend his title yesterday and was certainly pushed hard by 18-year-old Stroud runner Tom Mortimer before his thoroughbred experience and strength prevailed on the third and final lap around the new venue of Exeter Race Course

Owain also ensured that B&W kept their grip on the team title having won this event every year since its inception.

“We have never been beaten and I consider really important for the club to keep winning this title and underline our position as the strongest club in the South West” said team manager Mike Down.

Owain was supported by Pete Le Grice in seventh, Jack Millar eight, Luke Evans in a rare appearance on the country in 12th and Andrew Salmon closing the scoring in 27th.