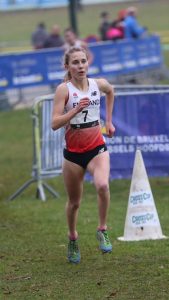 NEW Bristol & West AC signing Zoe Wassell has been called up into the England team.

The 19-year-old (pictured left) has been selected for the England Under 20s squad for the international cross country fixture in Burgos, Spain, tomorrow (NOV 11TH).

“I am over the moon to be selected for England again,” said Wassell.

“I last did this race two years ago but then last year was terrible for me as I had Achilles tendinitis on both feet and missed the entire cross country season apart from the odd race.

“In total I was on and off running for around six or seven months until the injuries finally cleared up so it was a bit of a nightmare really.”

Wassell, whose parents Jane and Mike were members of Yate & District AC when they were competing, is now on the second year of a sports science and management course at Loughborough University so has had good access to physio and rehab.

This weekend’s race represents another step back for Wassell and with the England trip to Spain to follow she is hoping to race herself into contention for the European Cross Country Championship trials in Liverpool later this month.

“It will be my last chance to win a GB vest as a junior and if I have a good run at Liverpool I am in with a chance,” said Wassell.

“But there are probably 15 other girls thinking the same thing and just six places in the team so it will be tough. But at least I am back training properly and racing again and that is brilliant.

“I am now really looking forward to the rest of the season, competing for my new club in the near future and being part of a women’s team.”