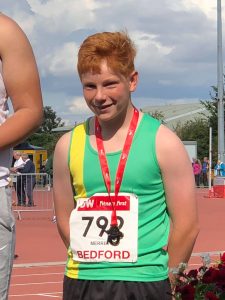 The 14-year-old not only won a silver medal at the recent England Athletics Championships in Bedford to eclipse his bronze at the English Schools Championships but also improved his personal best from 48.83m to 49.11m to put him third in the UK Rankings for under 15 boys.

“That was definitely my best performance of the season and I was so happy to finish second and throw a personal best,” said Merrett.

“My coach Matt Spicer did his magic again! He has been incredible for me as this time last year I was only throwing 36 metres. If someone had told me that I would improve to 49 metres twelve months later I would not have believed them.

“But over the winter there was a hard push in training and commitment. I was doing three sessions a week  training at Bath University, Whitehall track in Bristol and at Yate, where Matt is based.

“My mum and dad have driven me all over the place for training and competitions this summer but I think it has been worth it.”

With four open competitions still remaining, including the Mark Cawte Memorial in Swindon, there is still a chance of Merrett breaking the landmark 50m metres barrier for the first time.

“That would be the icing on the cake but even if it doesn’t happen, this has been my best summer so far,” added Merrett.

“Soon I will be back starting the winter training programme which is where all the hard work is done but I am looking forward to it after this season.”