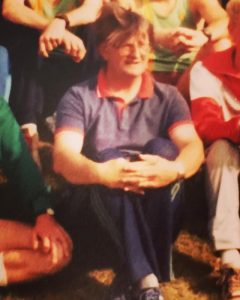 TRIBUTES have been pouring in this week following the announcement of the death of Mike Smith last weekend.

Smith was the founder and inaugural chairman of Yate & District AC, set up in 1983 to provide local athletics for the growing towns of Yate and Chipping Sodbury, plus surrounding villages, in south Gloucestershire.

Until then Smith had been actively involved in Bristol AC.

‘Mike did so much for athletics in the area. Huge respect for his vision and perseverance. Thoughts with his family,’ said Graham Howell, an athlete at the club who later became chairman himself.

Matt Spicer made his name as a trop class hammer thrower at the club before returning as a successful coach working with many young athletes.

‘You knew exactly what you wanted to achieve and you got it. No messing about. A male role model I’m forever grateful,’ said Spicer.

On their club website Yate & District posted this tribute: ‘Everybody at the club are very saddened to hear the news that the club’s founder and first chairman, Mike Smith, passed away yesterday.

‘Passionate, motivational, steadfast and visionary are all words people often use when talking about him. Quite simply, there would be no Yate Athletic Club without Mike.’
Smith’s funeral will be at Westerleigh (Crematorium) on Wednesday December 4th at 11am.