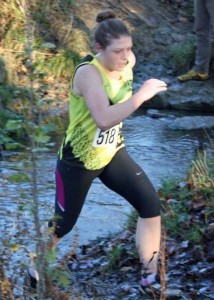 CLEVEDON AC’s Jed Bartlett enjoyed one of his best ever performances in the opening fixture of the 2018/19 Gloucestershire Cross Country League campaign.

With a field of over 200 senior men runners and boasting a strong presence from defending champions Cheltenham Harriers Bartlett, who is also a member of Barrow & Furness and only occasionally turns out for the north Somerset club, got off to a great start by finishing fourth, just 14 seconds off making the podium.

Bartlett’s best result in the league was a third at Gloucester last year.

In a perfect symmetry clubmate Laura Meech (pictured)  finished fourth in the senior women’s race – and 15 seconds off the podium – in what was her best ever result in the league.