SOMERSET runner Luke Prior can tick off one of his sporting ambition when he pulls on an England vest for the first time in Spain tomorrow (SUNDAY).

The 18-year-old from Burnham-on-Sea, who is a member of Wells City Harriers, makes his debut for the England under 20 men’s squad in the prestigious Juan Muguerza-Elgoibar International Cross Country meeting and admits the honour came sooner than expected.

“I always wanted to represent my country but I did not think it would come this early,” said Prior, who is a former student at King Alfred School. 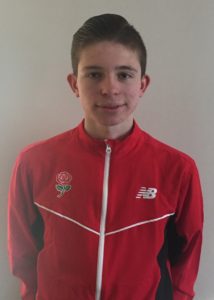 “Selection came as a surprise and it means a lot to me. Now I just can’t wait to get out there to be honest and do my best.”

Prior (pictured in his new England tracksuit) is clearly benefitting from training at the athletics stronghold of St Mary’s University in Weston London where is studying for a degree in coaching science.

“It is a great atmosphere at St Mary’s and I am surrounded by people who have the same mind-set as me and there is always someone pushing you in training,” added Prior.

Prior is one of five west country athletes who flew out to Spain last night (FRIDAY). Joining him in the under 20 men’s team will be Stroud & District AC’s Tom Mortimer, who is racing himself back to form after injury problems in 2016 and recently finished runner-up in the South West Championships.

Training partners Rachel Felton of Stroud and Slad-based Kate Maltby link up in the senior women’s race while City of Plymouth’s GB junior international Victoria Weir goes in the under 20 women’s event.