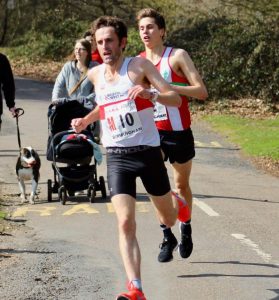 BUOYED from his selection to represent England in the Frankfurt marathon in the autumn Pete Le Grice notched up another personal best over the Bank Holiday weekend.

Racing in the Vitality 10k in London the Bristol & West AC runner finished 14th in a strong domestic field in a time of 29mins 32secs – just three seconds behind Olympic triathlete Jonathan Brownlee.

The time shaved seven seconds off the mark Le Grice set in the Chichester 10k earlier this year and consolidates his place as second in the South West Rankings and 23rd nationally.

There were personal bests galore from the Bristol & West women who made the trip to the capital.

Natalie Griffiths, Rosie Hattersley and Katrina Entwistle had ambitions to get below their target times of 36 minutes, 38 minutes and 39 minutes respectively – and that is what they did.

Griffiths ran sub-36 minutes for the first time with 35:57 for 34th, which took a massive chunk – 45 seconds to be precise – off the PB she set back in the Cardiff 10k in March.

The time lifts Griffiths to 14th in the Scottish rankings and eighth in the South West.

“All three believe there is more to come and will be looking to race 10k again soon,” said coach Keith Brackstone.