IN her first race of the year former Olympian Kate Reed raced to an impressive victory in the Bath half marathon today.

Reed’s time sliced 59 seconds off the mark she recorded on her debut in the Tallahassee half marathon, Florida, which she set over two years ago and puts her eighth equal on the UK Rankings. 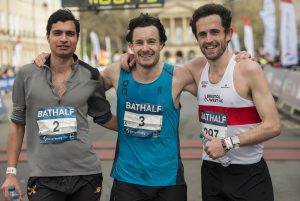 Leading man was late entry and hot favourite Chris Thompson in a swift 63:10 from Nick Goolab (64:34) and Bristol & West’s Pete Le Grice, whose time of 64mins 55secs was not only his first sub 65 minutes clocking but also carved 1mins 27secs off his PB set when winning the Great West Run in Exeter last year.