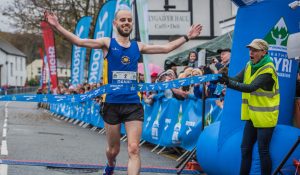 Twelve months ago Jones produced arguably the best win of his career as he lifted the magnificent trophy for one of the most challenging races in the country with a time of 2hrs 36mins 54secs.

Just champion: That was Dan Jones after winning the Snowdonia marathon last year

“The preparations have been solid and I am looking forward to the race,” said Jones.

“I’ll be trying my best to defend my title but I know there will be some good competition, including former winner Russell Bentley and a couple of other guys with good half marathon times to their name who have the potential to run a fast marathon.

“But as always I will set my own pace and stick to it. I won’t react if other people go off fast. I’ll just try and be consistent and if it is good enough to win then great.”

Having finished runner-up in 2016 (2:36.46) Jones knows the course well and certainly won’t take it lightly, especially its daunting final miles of ascent and decent.

“It is a tough race but well worth doing as it is so different to other marathons like London,” added Jones.

“And luckily I don’t think it will be as hot as it was in London this year!”

Jones struggled with the heat in the capital in April finishing in 2:41.08, over ten minutes slower than the personal best he recorded over the same course the previous year.”

There is no question of setting PBs on the Snowdonia course but Jones knows that if he can run around 2hrs 36mins again then he will have a strong chance of making the podium.