WITH the year coming to a close Jenny Spink will retain her place as the top female marathon runner in the South West.

Injury meant that the Bristol & West AC runner (pictured, centre, above after winning the Bristol half marathon in 2016) was forced to wait until earlier this month to tackle the 26.2 miles challenge and she made the short trip from her new home in Spain to tackle the Valencia marathon.

“For me it was a relief more than anything to run 2:36. After my back injury last summer it has taken a lot of time and hard work to get back to fitness,” said Spink.

“Obviously I had set out to run a PB but I was only a minute off that so I can’t be disappointed.

“Valencia is a great marathon to do. The atmosphere was fantastic. It was a good day for a marathon with near perfect conditions.”

Spink’s personal best remains the 2:35.37 she ran in Toronto three years ago but she has had her injury problems since then plus earlier this year she lost her coach Bruce Tulloh.

“It was my first marathon back since Bruce has died and I ran Valencia for him,” added Spink.

“I think he would have been pleased to see me back out there and  running well.” 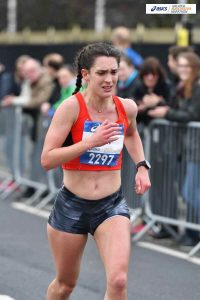 As well as putting Spink on top of the South West Rankings, supplanting Team Bath’s Eilidh Bell (pictured right) who ran a PB of 2:44.56 in San Sebastian last month, it also lifted her to seventh quickest in the UK.

“I would like to be higher than that so I shall be targeting a Spring marathon,” said Spink.

“I have yet to decide which one. I am considering Manchester.”