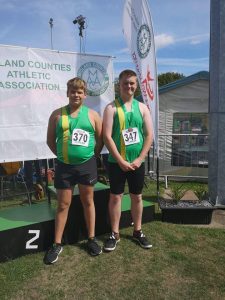 YATE & District AC throwers James Viner and Toby Conibear made their presence felt at the Midland Championships in Nuneaton over the weekend.

Viner, who is one of a very talented group of west throwers, recorded a throw of 43.87m to lift the under 15 boys’ title – a huge improvement on his fourth place twelve months ago when throwing 30.29m underlining the improvement he has made under leading hammer west coach Matt Spicer.

Viner’s best throw of the season remains 44.63m, which he recorded to finish fifth in the English Schools’ Championships final and puts him eighth in the UK Under 15 Boys’ Rankings.

Conibear finished third in the under 17 men’s hammer with a best throw of 53.02m.

There was further success for Yate with Emily Whitaker winning the under 17 women’s 1500m steeplechase in a time of 5mins 44.49secs.