CHARLOTTE Green will make her debut for England in the inaugural Manchester International tomorrow  – four years after the London Olympics inspired her to take up track running.

Remarkably that debut will come just over three years  after making her debut in the event – clocking 11mins 23.32secs to finish 11th in the Briti 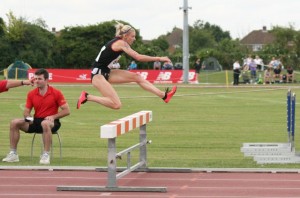 sh Milers’ Grand Prix in Watford – proving that this late convert is a quick learner.

“I had run a few road races but the club said they were looking for someone to run the steeplechase as they were trying to get into the UK Women’s League.

“So I offered to give it a go and that is why I started to run the steeplechase. The big aim when I started racing on the track was to try and get an England vest for something but I really had no idea at what event!

For the record she won that 2000m ‘chase in the UK League qualifying match at Abingdon in a time of 7:47.5 – she also too maximum points in the 400m hurdles B event and was third in the 800m! – and has been one of Bristol & West’s most loyal league athletes ever since in their progress to Division One.

But until then she had just been an atypical road runner, who took the plunge in the 2010 Bath half marathon (95:42) before her one and only marathon in London when she finished in 3hrs 40mins 08secs.

Half a dozen off road races followed in 2011 and that may just have been the limit of her ambitions until London 2012 sparked and desire to test herself on the track.

“It didn’t quite work out for me at the Olympic trials but I definitely feel I am in sub 10 minutes shape,” added Green.

“I think next year it will be time for me to really commit myself to the steeplechase and I may head to America to try and get a fast time early in the year.

“But having only started running the 3k ‘chase in 2013 I definitely feel I am going in the right direction and I am very excited about next year because now I would love to try and quay for a major championships and get my first GB vest.”