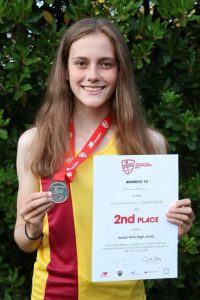 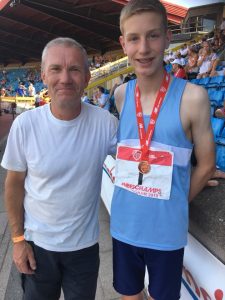 FIONA Barkley and her coach Jeremey Dale can take a well deserved bow after their success at the English Schools’ Track & Field Championships.

Teenager Barkley, who was representing Gloucestershire, was the third member of Yate & District AC to win a medal at the two-day event.

Barkley cleared 1.64m, just one centimetre off her personal best, to win the silver medal in the junior girls’ high jump. It was her debut in the event having not qualified in 2017.

Her silver was the second medal for Dale’s high jump squad as Luke Ball finished third in the junior boys’ high jump.

The other Yate club athlete to finish on the podium was Owen Merrett, representing Wiltshire, in the junior boys’ hammer.

Merrett is coached by former schools’ champion Matt Spicer, who also guided James Viner to fifth in the junior boys’ hammer with a PB of 44.63m and Toby Conibear to seventh in the inter boys’ event, also recording a PB of 57.22m.

Congratulations to all the athletes and coaches.