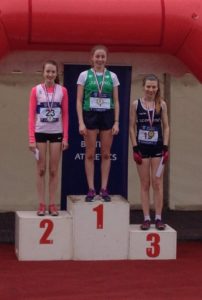 WHAT a great weekend for Thornbury-based runner Hannah Hobbs.

On Saturday she took it easy in the Avon Schools’ Cross Country Championships to finish runner-up behind her Westbury Harriers clubmate Ellie Wallace in the senior girls’ race.

Hannah was conserving her energy for the British Cross Challenge meeting in Cardiff the following day and that decision paid off handsomely as she finished runner-up behind Ireland runner Sarah Healy and just a second ahead of Scotland’s Eloise Walker.

All three girls are pictured on the podium, courtesy of Westbury Harriers with Hannah on the extreme left

That wasn’t the only second place for the Westbury contingent as Dalis Jones, who is doing so well in the Gloucestershire League, was runner-up in the under 13 girls’ race.

Bristol & West AC’s South West champion Owain Jones continued his good form in the Challenge series with fifth place in the senior men’s race to back up his ninth in Antrim, 21st in Milton Keynes and 64th in Liverpool.

Clubmate Hugh Sadler finished seventh in the under 17 men’s race in which Cornwall’s Finn Birnie was third.