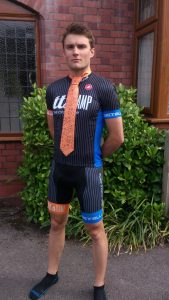 COMPETING in the Mizuno Amsterdam half marathon Bristol & West AC’s Luke Grenfell-Shaw finished a fine seventh and third Brit in a time of 70mins 28secs.

The time was a huge personal best, slashing over five minutes off the time of 75mins 23secs which Grenfell-Shaw (pictured left) set on his debut in the Bristol half eight years ago.

Since then he has only raced the distance once, clocking 80:08 in Bristol last year.

Further down the field it was interesting to see the name of clubmate Miranda Sadler.

The former English School’s middle distance track medallist has spent the last three years at Harvard University and according to the Power of 10 Rankings this was her first outing over the half marathon and her time was 94mins 38secs.