IT was great to see Ellie Wallace back enjoying her running again on Sunday.

The plucky Westbury Harrier has suffered numerous injuries and illness problems in recent and yet has shown great character and determination to stick at the sport. 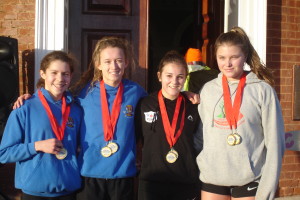 The 16-year-old’s ability has never been in question and she showed that again with third place in a talented field of under 17 runners at the South West Cross Country Championships.

Wallace was delighted with that performance and rightly so. Extra satisfaction was gained by leading the Westbury Harriers squad of  Rosie Allen (sixth), Ellie Leather (11th) and Ella Brimble (17th) to the team title in the club competition.

For good measure the same fur girls double up to win the county team title for Avon, beating Devon by 11 points with Cornwall third in 51.

Hopefully Ellie can now enjoy an injury-free period and enjoy even more success in 2016.