FRANCESCA Eddy leapt to second in the 2016 South West Rankings after clocking a personal best in the Asics Manchester marathon on Sunday.

The Bristol & West AC runner completed the 26.2 miles in a time of 3hrs 05mins 40secs to  carve almost five minutes off her previous best set in the Taunton marathon just last year.

That time continues Eddy’s excellent start to the year as she has also notched up PBs over 5k (19:00 in the Aztec West Fast race) and the half marathon (86:26 in Bath).

It is also worth noting that since making her debut at the marathon in 2011, completing the Shakespeare event in Stratford-upon-Avon in 3:27.59, Eddy has now improved by 22 minutes and is edging ever closer to that magical three hours barrier.

How to enter the 2016 Avon Track & Field Championships

THE Avon County Track & Field Championships for all ages will be held at Yate Outdoor Sports Centre on Sunday 15th May 2016. Entries can be on-line or by traditional paper forms and to get details click on the following link:

The closing date for entries is Sunday 8th May.

It should also be noted that the Under-13 and Under-15 800m championships for both boys and girls will again be held as part of the Avon AA Open Meeting on Tuesday 24th May but competitors for this event need to enter using the entry form for the main championships.

Why West athletics stalwart Haines is retiring from the sport 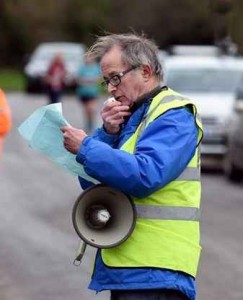 TERRY Haines, widely regarded as Mr Gloucestershire Athletics, has retired from the sport.

“It is time for me to go and the Arlingham will be my last race,” said Haines.

“I am 73 now and I have to go sometime and I would rather go now than taken out in a box – which does happen!

It is a fitting departure point for a journey that began when the 18-year-old Sir Thomas Riches School student from Longlevens arrived at Gloucester AC with the force of a whirlwind.

“I got heavily involved right from the beginning because I had firm ideas on how athletics should be run,” added Haines.

“I moved straight into the management side and into organising events as there were not many suitable ones locally in a rugby-mad city like Gloucester.

“I helped to revive Gloucester AC, which is one of the oldest clubs in the country and then later founded Severn AC.”

His energy, drive and firm opinions soon established  Haines as one of the main personalities in county athletics.

Beyond the sport it was no surprise that he also served as Gloucester mayor and labour city councillor  but in terms of athletics, in which he was also an active participant, his impact on the county cannot be underestimated – and certainly not ignored.

“My aim was always to serve the athlete and I would like to think the example I set in organising events that were friendly, helpful to club athletes and cheap to enter will be maintained but I am not optimistic,” said Haines.

“I am very concerned about what is happening with commercial companies increasingly taking over events. I believe the whole ethos of that is wrong.

“But locally I am proud of what I created and believe I catered for the needs of athletes.

“I shall still maintain my interest in the sport and I will always be available for advice if required.”