CHARLOTTE Green had a busy day at the fourth British Milers’ Club meeting at Oxford on Saturday.

She was first on at 3pm in the women’s 800m C race and knew it wasn’t going to be another PB day when the over-excited pacemaker went through the bell in a touch over 60 seconds.

Green was holding back from that at the back of the field and had to be content with 2:09.05 for fourth.

“That is still my second fastest time of the season and I am happy with that,” said Charlotte. “It has been a great season and I have made so much progress.”

Green then earned herself some expenses by acting as a pacemaker for later races. 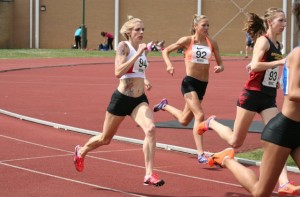