SEVEN years after winning the senior girls’ 200m at the English Schools’ Championships Emily Diamond won her first senior international medal at the European Championship in Amsterdam over the weekend.

The 25-year-old Bristol & West AC sprinter from Clifton (pictured on the far right of the winning GB team in photo) ran a storming first leg in the 4x400m women’s relay, giving the GB squad a led that they neve 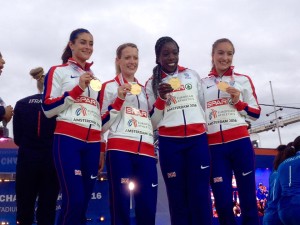 r lost as they raced to a brilliant victory on the final day of competition yesterday.

The gold medal comes just a few weeks after Diamond, a former winner of the Easy Runner/Bristol Post athlete of the month competition, won the British 400m title to secure her place in the team for the Rio Olympics.

Coincidentally it was also the English Schools’ Championships in Gateshead  over the same weekend and while there were no Avon winners this year Diamond’s success is further proof that the schools’ arena is a staging post on the path to glory – it just requires a lot of hard work and persistence.