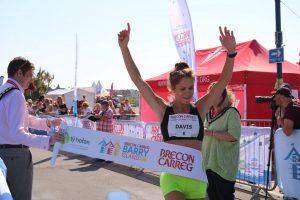 Red-hot conditions on Sunday meant times weren’t overly fast but Davis was too strong for Stroud international Rachel Felton, who won the Torbay half marathon recently, as she clocked 34mins 36secs.

That put her 1min 12secs clear of Felton while the men’s race was won by Wales international Dewi Griffiths in a swift 29:47.

Davis’ victory comes on to of her recent excellent fourth place in the 5000m at the England Championships in Manchester, her best performance on the track in a national competition.