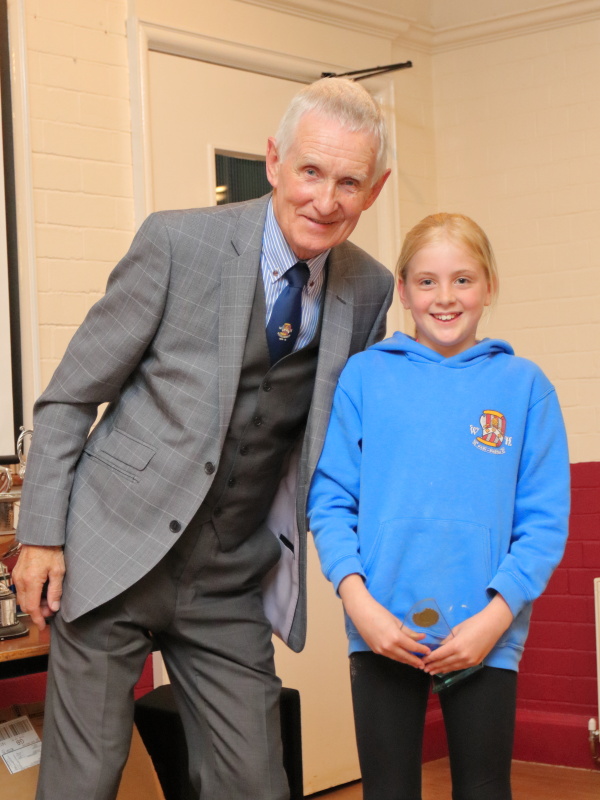 YOUNGSTER Estelle Lowe raced to a crushing victory in the third Gloucestershire Cross Country League in Cheltenham on Sunday.

On a sodden Pittville Park circuit the Westbury Harrier (pictured above with Westbury legend George Blackburn)  made light work of the heavy conditions to finish 46 seconds clear of runner-up Rosie Reynolds from the host club Cheltenham Harriers.

The victory continues a terrific spell for Lowe since she won the Tri-Counties under 13 girls’ title at Bath University before Christmas.

Since the turn of the new year she has finished first girl in the South West Inter-Counties Championships and then won the recent Gwent League race at Chepstow to make it three wins out of three.

In the senior men’s race Team Bath have given themselves an outside chance of snatching second place in the overall team competition with just one fixture remaining on Sunday March 1st at Old Down Country Park near Thornbury.

Team Bath have narrowed the gap to the University of Bath squad to 36 points – Cheltenham & County Harriers are the runaway leaders – to give them a fighting chance if they can get out their strongest team and hope the students have an off-day.

Newcomer Aidan Daniel, aged 21, led the way and not only proved that his win in the gruelling Slaughterford 9 last month was no fluke but also underlined how much he has improved since making his debut in the second match, just before Christmas, when placing 17th and third scorer home for the club.