WHAT a great start to the year for Bristol & West team-mates Kate Hulls and Charlotte Green.

Well, to be exact more of a super finish to 2015 as the pair joined several thousand runners for the New Year’s Eve 10k road race in Madrid last night and gave themselves plenty of reason to enjoy the midnight celebrations later. 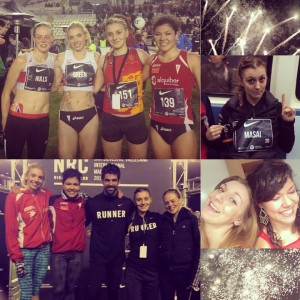 Kate led the way with a sparkling PB of 33mins 37secs to slice 10 seconds off her previous best with Charlotte, racing for the first time since lifting the South West cross country title, smashing her PB by over a minute with 35:60 for ninth place.

Kate’s run placed her an excellent fifth with victory going to Linet Masai of Kenya in a sizzling time of 31:38 from France’s Clemence Calvin (32:41) and Iwona Lewandowska of Poland third (32:53). In fourth was Salome Rocha of Portugal in 33:35.

The par were joined by Westbury Harriers’ Floren Scrafton, who is currently living in the Spanish capital and she recorded a time of 36:46, which was also a PB – and a timely way to mark her 22nd birthday on Christmas Eve. Floren finished 1th woman.

Charlotte’s photos of a great evening in Madrid

“I was chuffed after workings lots of hours over Christmas and then doing a track session on the Monday,” said Charlotte.

“I didn’t expect that I was looking for 36 minutes as I was running it more for fun as endurance is not my thing.

“Kate is very pleased as she went off hard from the gun and was rewarded and Floren was chuffed as well.

“It was an amazing experience and we won’t forget it.”