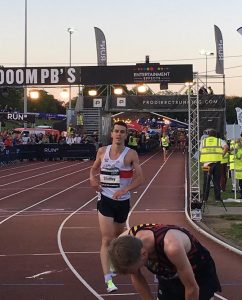 Dan running a PB in the Highgate Night of 10,000m Festival

“I am delighted to be selected for the England team at the Commonwealth Games Half Marathon,” said Studley.

“A short, sweet track season with new personal bests over 5000 and 10000m; but nothing better than racing in the red’n’white through the streets of Wales!”

Studley’s section continues a great year for the runner having also made his debut for Great Britain at the World Half Marathon Championships in Valencia last March.

He also ran a PB of 64mins 23secs for the half marathon in Barcelona at the start of the year to get the ball rolling in what has been a terrific 2018.