Oli Mott (14:51) and Phil Wylie (15:11). Top local runner was Bristol & West’s much improved Jarlath McKenna, whose time of 15mins 19secs smashed his previous best of 15:37 which he clocked on the same course in February.

That was just under a year ago so the 20-year-old student’s progress since then has been remarkable as on Tuesday he scorched around the course in a time of 15:22 for fifth place.

That obviously obliterated his course best and also smashed his all-time 5k road best of 16:47 which he set on the old Pomphrey Sports course in April 2014.

ORGANISER John Knowles reckons the British Milers’ Club regional meeting at the Exeter Arena on Tuesday night was one of the best ever.

“We had 138 entries of which 122 ran in 11 races on the night and there were 75 personal bests which equates to 64 per cent off all finishers,” said Knowles.

“That is a fantastic result and just shows how quick the Exeter track is for middle distance runners. We also had two young athletes, Anna Burt (2:06.23 in the 800m) from Team Bath and Oliver Carvell (4:08.53 in the 1500m) from Bridgnorth, who produced performances that put them top of the UK Rankings so that was very satisfying.

“To think that when we started these regional races we were delighted with 45-60 entries but it would be good to see even more runners from across the West Country come and support the event – and improve their personal bests and get championship qualifying times.”

TEAM Bath athlete Anna Burt has put herself into an excellent position to be selected for the European Youth Olympics in Georgia after soaring to the top of the UK Rankings this week.

The 15-year-old smashed her personal best of 2mins 06.23secs to win the women’s 800m A race at the British Milers’ Club regional meeting at the Exeter Arena on Tuesday night.

“Hopefully I will get selected but if not then there is always the English Schools’ the week after,” said Burt, who is coached by Kevin Brunt.

The qualifying standard for the Europeans is 2mins 09secs and so far six British girls have achieved that this year. There are no official trials for the event so the team will be selected on form and times and on both accounts Burt is making a persuasive case before the selectors meet on Monday June 27th. 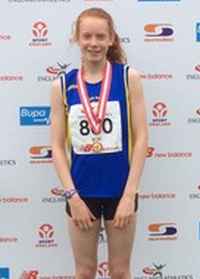 MARK Brace, who is Area Coach Mentor South West ( Endurance), has confirmed that the England Athletics South West Endurance Conference will be held in Exeter over the weekend of  October 29/30th.

For further information see the link at: http://www.englandathletics.org/england-athletics-news/sw-endurance-network-conference-29-30-october

Alternatively contact Brace either by phone (07540703511) or email him: mbrace@englandathletics.org