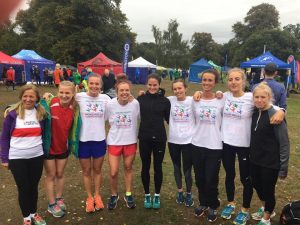 FOR the tenth time in the past 12 events Bristol & West AC’s senior women finished among the medals at the Midland Counties Road Relay Championships.

The silver won by the squad of  Natalie Griffith,  Hannah Pollack, Catie O’Donoghue and Mel Newbery in Saturday’s race was the seventh of that colour since 2006.

In that time the women has won the event twice and also had a sole bronzer last year. The only blemishes in that enviable record came in 2016 when they didn’t field a team and then in 2006 when they finished sixth – in 2012 the event was cancelled due to an E-Coli outbreak.

It is impressive to note that the quartet this year were winning their first medals in this traditional autumn race while the club also claimed the B team prize in eighth place.

“The girls did so well and I was really chuffed for them,” said team manager Keith Brackstone, who has to miss the event for the first time in living memory as he is recovering from a heart operation.

“The B and C teams also did really well so it shows what strength in depth we have at the moment with some really good young runners and a great team spirit.”

Griffiths gave Bristol & West a solid start on the competitive opening stage finishing in sixth, clocking the ninth fastest time of the day overall before Pollack lifted them to fourth at the halfway point.

A special mention also to former Yate runner Jane Wassell, who joined forces with her daughter Zoe in the Stroud women’s team that finished a fine 10th, with Zoe clocking one of the fastest times of the day.