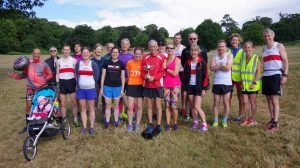 KEITH Brackstone was given a fond farewell on his retirement from Bristol & West AC at the Ashton Court parkrun over the weekend.

Former RAF officer Brackstone has been working as the club’s development officer, as well as his coaching and team managing duties, for the past several years but health issues have forced him to step down and enjoy a less stressful retirement.

Many of the runners who have been helped by him turned out for the event and fittingly first winner home – although unofficially as he wasn’t carrying a bar code – was club stalwart and club general secretary Owain Jones.

“To further mark Keith’s contribution, the club have introduced the Brackstone Cup to be presented annually for the outstanding individual or team achievement across all age groups and events in a calendar year,” said club chairman Roger Brocklesby.