ADA’ora Chigbo had to settle for a frustrating equal fifth place in the high jump at the European Youth Olympics in Georgia. 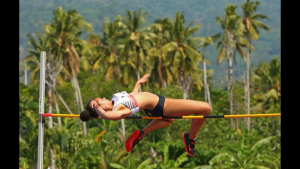 om her pool clearing 1.78m the 17-year-old North Somerset AC athlete from Portishead (pictured left) managed 1.75m in the final which was won by Sweden’s Maja Nilsson with a personal best of 1.82.

Urte Baikstyyte of Lithania won silver with 1.79 and 1.75m was good enough for the bronze with Despina Maltable getting the medal by virtue of countback and fewer failures at the lower heights.

Unfortunately Chigbo failed her first attempt at 1.75m which effectively cost her a stab at the medal before failing all three attempts at 1.79 along with Monika Zavilinska of Slovakia.

Chigbo’s lifetime best is 1.83m which she cleared just last month in Spain so clearly she will be disappointed with the outcome in Georgia.