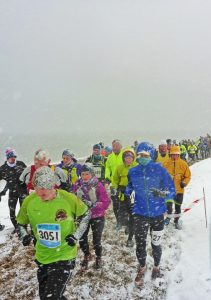 FOR anyone interested in running the legendary Grizzly event around east Devon in 2019 the ballot for entries will open on Friday August 31st from 10am.

Runners who want to go in the ballot for one of the 2,000 places then have until 8pm on Friday September 21st to register their interest and will then be notified on Friday October 5th.

The date for the 2019 Grizzly will be Sunday March 10th – the week before the Bath half marathon.

Earlier this year the Grizzly, which starts and finishes in the seaside town of Seaton, was officially ‘cancelled’ due to the heavy snow and whiteout conditions on the day although several hundred runners, many of whom were in East Devon for the weekend, opted to run the course at their own discretion and liability.

The same bad weather spell also forced the organisers of the Bath half to cancel the event for the first time.

For further details of the Grizzly see the website at: www.axevalleyrunners.org.uk